Key aspects
Global stock markets posted gains across the board during August. He highlighted the low level of volatility throughout the month, something that is not usual since the lack of volume typical of the summer period makes the movements magnify.
At the geopolitical level, the humanitarian crisis in Afghanistan was one of the relevant incidents of the month. This event generated a temporary sales episode, but with very little travel. It is to be expected that, in the short and medium term, the tensions between the West and the Middle East will intensify and may occur
volatility peaks.
The main protagonist of the month was the Jackson Hole Symposium. It is an annual meeting held every August in which Central Bankers from all over the world meet in order to determine the global situation at the monetary level. In recent years it has gained special relevance since after finalizing draft measures have been announced, especially by the Fed. At the end of the 3-day meeting, Jerome Powell delivered a speech that the market liked by not specifying a specific date for the start of Tapering. It was discounted that its start would be announced with a specific date. As this was not the case, the stock markets understood that the monetary stimuli would remain active
for longer.
North American fixed income experienced episodes of volatility throughout the month. The IRR of the 10-year government bond in the USA ranged between 1.17% and 1.36%, which can be considered a wide fluctuation band, given the type of asset in question. For their part, European government bonds experienced continuous increases in their IRR throughout August. This occurred in all curves and in all terms with the consequent contagion effect on corporate bonds.
The volatility of gold stood out, especially during the first days of the month. The commodity dropped more than 6% in 2 days, losing the level of 1,700 $ / Oz. Despite this, during the rest of August the metal experienced rises that led it to recover all that was lost, returning to trade at levels close to $ 1,800 / Oz. 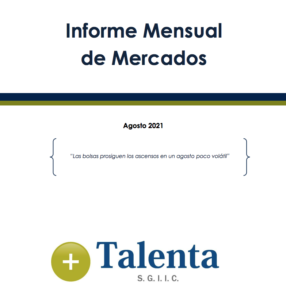